The Art of Wolfgang Laib 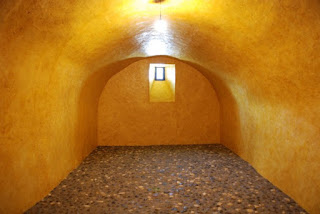 Beeswax covered room in the mountains created by
German Artist Wolfgang Laib,
who also works with pollen that he gathers himself.

I admire his work, and that of  Anish Kapoor and others
who work in  installation and with site specific materials.
I just wish that somehow that honeybees were more involved. 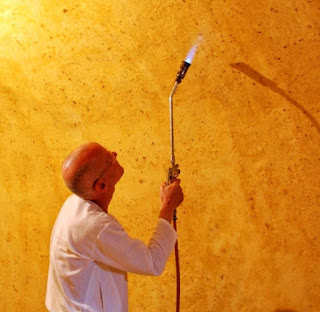 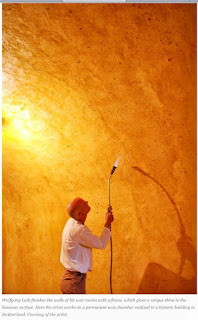 and more from
Art Daily:
http://www.artdaily.com/index.asp?int_sec=2&int_new=56655#.UBNF6zHLylA

"The artist began working in beeswax in 1988 and, using removable wax plates, created wax rooms for exhibitions at the Museum of Modern Art, New York (1988), Kunstmuseum Stuttgart, Germany (1989), De Pont Museum, Tilburg, The Netherlands (1990), and Kunstmuseum Bonn, Germany (1992). All four wax rooms entered the museums’ collections and remain on display in Stuttgart and Tilburg. Laib went on to create beeswax chambers in nature, fulfilling a lifelong dream. His first, La chambre des Certitudes (2000), is situated in a granite cave of the French Pyrenees, accessible only by footpath. His most recent, on his own property in southern Germany, is an insulated shaft of golden beeswax that extends 13 meters into the earth. For these outdoor rooms, Laib initiated the process of heating wax and applying it to the walls with an iron that he will use at the Phillips. Over four decades, Laib has used organic substances associated with life-giving sustenance—milk, pollen, beeswax, rice—to create art of extreme simplicity and meditative power. In 1975, he created his first Milkstone, an ongoing series in which the slight concavity of a polished white marble slab is filled daily with fresh milk. Phillips Curator at Large Klaus Ottmann (who organized Laib’s international retrospective that originated at the Hirshhorn Museum and Sculpture Garden in 2000) performed the ritual every morning during a brief installation at the Phillips last year. Laib’s pollen pieces are also highly ritualistic—in spring and summer the artist collects dandelion, hazelnut, pine, buttercup, and moss pollens from fields surrounding his home and then displays the delicate material in simple jars or sifted directly onto the gallery floor. His largest pollen piece to date at roughly 18 x 21 feet, Wolfgang Laib: Pollen from Hazelnut, will be installed by the artist in the atrium of the Museum of Modern Art in New York in early 2013. "
More Information: http://www.artdaily.com/index.asp?int_sec=2&int_new=56655#.UBNF6zHLylA[/url]
Copyright © artdaily.org


Posted by VOGTHORSTAR at 6:52 PM No comments: