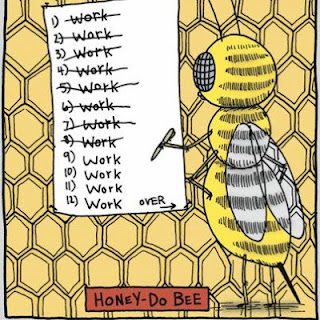 Love and Grace, the Russian Queens are doing well in their hives and their field bees are collecting goldenrod and purple aster and other wildflower pollen like crazy right now in the last major blooms before the midwinter camellias blossoms.


However, Sweet Hope, the Italian Queen, has proven to be less stable than the Russian Queens and shown her vulnerability, and evidently hive beetles forced her out.( ? )  She swarmed and left the hive.
She left pollen and some honey and  some brood behind.  Also signs of hive beetles.. not alot.. but enough, and evidently too much for her to live with.

I found her unmistakable golden bee swarm hanging on a fallen red oak limb near my patch of lemon balm in my herb garden.
I put on my suit, crept up to the swarm, and placed an empty NUC under neath the swarm. I tapped the branch twice and the swarm dropped in beautifully. I closed the box and walked off with Sweet Hope to bring her back down to the hives. I cleaned out her old hive,  it was now beetle free.. as well as Faith's old hive,  which was certainly beetle free, and put new frames into  Faith's hive.  It turned out that the nuc had a hole in it.. so I prepared Faith's  hive and placed Sweet Hope  quickly into it.... and also placed  a sugar and crisco patty inside with some food and then placed an aster  spring into the entrance to keep it closed.
After a few minutes.. I checked inside.. Sweet Hope's  bees were quiet and calm inside Faith's Hive. tomorrow I will check them again, and remove the Aster.

I hope that she will stay in Faith's Hive, as she has a better chance of surviving the winter there.

It was my first swarm catch, and although not a 'wild " swarm.. was an exceptionally amazing experience to drop that whole swarm into the Nuc like that.

Such is the primal , giving, beauty that is nature.
Once again, the bees never cease to amaze me.. and teach me so much in the process.

Posted by VOGTHORSTAR at 7:25 PM No comments:

Turns out  it was the wast from a nearby M &M Candies plant in France!

Beekeepers in northeastern France say they have produced batches of unusually colored honey in recent months as a result of bees carrying unknown substances from a nearby plant processing waste from an M&M’S candy factory. Since August, beekeepers in the region of Alsace say they have noticed bees returning to their apiaries with colorful substances that have altered the color of their honey, turning it blue and green. After conducting some research, they discovered that a nearby biogas plant has been processing waste from a Mars candy factory that produces colorful M&M’S. The beekeepers, who are already dealing with declining bee populations, are not amused by the batches of colorful honey. “For me, it’s not honey,” Alain Frieh, president of the apiculturists’ union, told Reuters. “It’s not sellable.” While Mars did not respond with a comment, a co-manager for the biogas plant said the company has cleaned its containers and will begin storing incoming waste in a covered facility. "
Yale Environment 360: Blue and Green Honey Is Linked to an M&M’S Factory in France
Posted by VOGTHORSTAR at 12:04 PM No comments: