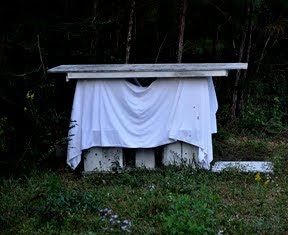 At the beekeepers club meeting last night, several members said that they had hives that had been robbed. What was most interesting is, that the further west that they were from me, the earlier in the month they had their hives robbed. Most had one or two hives robbed of several healthy hives. Most said it was the little wild bees or "german" bees.So I guess that the drought is a part of it all. I felt not alone in my dilemma, especially since I had already shut down the hives to one thimble sized entrance before the robbing began. They also confirmed that the hives could be robbed and killed in a few days as mine were.
That is one of the things that is great about being member of a great group of beekeepers is that they understand all the crazy things that can happen. Their care, compassion and love of their bees, as well as their immense knowledge and many lifetimes worth of experiences humbles me always. Plus they all have a great sense of humor too, which helps when you are facing a robbed hive situation!
Posted by VOGTHORSTAR at 3:14 PM No comments:

From Brushy Mountain Bees- Important News Report by Dan Rather on Pesticides, Honeybees and CCD

If you don't believe the beekeepers, who are and have been seeing this firsthand-
Then maybe a man in a nice suit with a low voice in front of a camera at a desk can help you understand it.
Here is Dan Rather's report.

Posted by VOGTHORSTAR at 11:21 AM No comments: